Which game is at the top of your wishlist?

For me it's #Kingdomino Origins!

I've been having a growing appreciation for shorter and lighter games that still pack a nice punch. My wife and I have our second baby coming on the way and he'll be popping out in the next few days too :D And after having played this game around a month ago, I've been wanting to buy it so that I can introduce it to my family.

Here are some pictures from my last session. You can check out the rest on the game page: https://www.boardgameatlas.com/game/IFveiq1ZfZ/kingdomino-origins/images

Here's where I shared about my first impressions.

Which game is currently at the top of your list?

#Brian Boru: High King of Ireland for sure! It looks really cool, and it's started getting a ton of hype now that it's come out.

Nice! Looks like it would go right next to your copy of Inis :)

I don't know how similar the two games are, but I've been interested in #The King is Dead: Second Edition, which is designed by the same person.

Yes! The art reminds me a lot of Inis, and it's even another area control cardplay game!

I'm interested in The King is Dead as well! Looks like a very cool game with really simple rules.

I recently was gifted The King is Dead and am suuuper eager to play it!

Yes indeed! I actually put it on my wishlist and approximately 2 days later my BGG secret santa sent me shipping info and a few days after that, it was at my house lol. I planned on playing it this past Monday, but may or may not have hit a deer on my way to the meetup :( Should be able to get it played this weekend though!

Dang! Hope the damage to your car wasn't too bad. You'll have to report back when you get to play it! I've been interested in that one since they announced the 2nd edition, but haven't gotten around to buying it.

It wasn't bad - literally a deer in the headlights moment as it just smashed my passenger side light lol. Just sucks needing to rely on other people for rides for a bit.

As for The King is Dead, I just played a quick game against my brother! I think it will be better with more than 2 but it was fun! A lot of thinking about when to play, what to move, and what to take. Interesting decisons for sure.

The thing I wonder about the game is how much strategy is there, especially really in the game? The game state seems so dynamic that I feel like for the first half I would have no idea what I'm doing in terms of strategy.

Haha ironically at the beginning of the game I had some idea of what I wanted to do, but no real plan to get there. My brother was going for the invasion end game trigger, basically just making as many of the areas as possible not have a clear majority. He was chugging along collecting sets of cubes and set up the board pretty nicely to achieve that, but used his cards up before me. I had to change course based on the cards I had left to manipulate the board state so that another faction was leading.

Huh, well it sounds really interesting regardless. Think you'll get it played at 3+ soon?

I'm trying to get it played tomorrow..we'll see how it goes lol

I've never heard of this game but as someone who has studied Irish History I'm definitely going to check it out.

Yeah it seems like something that could be right up your alley!

This game was pretty appealing to me too, until I watched a rules explanation lol. It seemed like a lot of little mini games and things to make it complex for the sake of complexity. It's still on my wishlist, but I wouldn't go out of my way to get it for myself lol. Aka if someone bought it for me as a gift, I'd be happy.

Haha, I get that. To me that just seems like any mid weight Eurogame though. Like #The Castles of Burgundy is all minigames, for example.

I guess that's fair lol. I was just expecting the rules to be over with a couple of different times and it felt like "but wait, there's more!" haha.

Lol, well maybe I'll get it and we can play it together one day

#Hadrian's Wall is at the top of my list. It's on order and I'm hoping it'll arrive in time for Christmas.

Well if you've ordered it, it seems like you could take it off your wishlist lol

I've got a lot of games jostling around. If you made me pick right now it would probably be#Weather Machine. Looks really cool!

That box art 😍 (for those who've never checked it out, the picture is below)

Also, I'd say that Weather Machine's theme interests me the most out of all other Lacerda games. 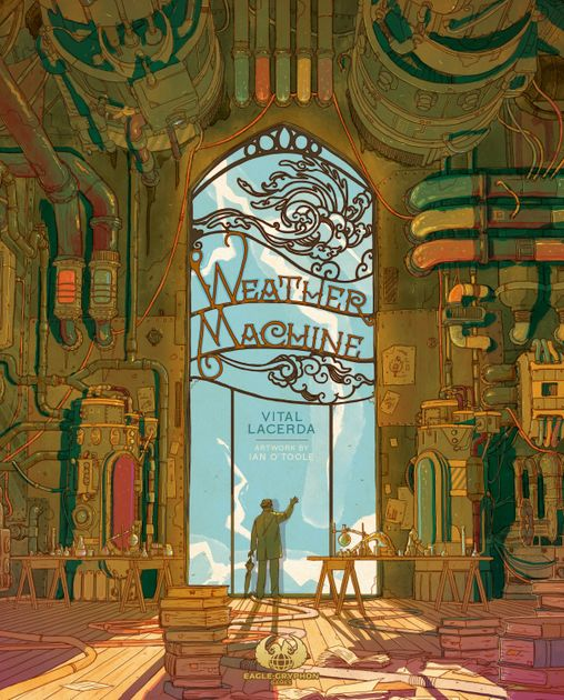 Hey@philryuh congrats on baby two!  The only game on my wishlist right now is partly due to the fact that I can't find it right now.  I'm really interested in picking up #Inis.  Besides that I'm so happy with my collection (as many here know)... and nothing is blowing me out of the water at the moment.

The only other thing I'm partly interested in is #The Lord of the Rings: The Card Game

I love Middle Earth and have though about picking this up just as a solo game to immerse myself more in that world.